Steven Defour looked like he was on his way to becoming one of premier midfielders a few years back while at Standard Liege in Belgium. So much so that when he broke his leg, Sir Alex Ferguson sent him a get well letter. At Standard, he became a hero for the club and its captain during a golden period that saw them win the league twice in a row. He has since transferred to Porto, where he spent a few years, before being transferred to Anderlecht. For those of you who don’t follow the Belgian league, this transfer would be like Steven Gerrard transferring to Manchester United or Leo Messi moving to Real Madrid. A few players in the past have done similar, Michael Owen to Manchester United and Luis Figo to Real Madrid spring to mind. But few meant as much as Defour did to Standard Liege. They also didn’t receive what can be considered a straight death threat by some. 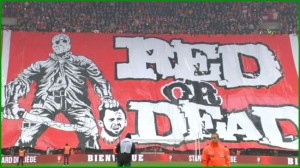 Steven Defour was obviously emotional during the game, getting yellow carded very early into the game. It was this bit of madness, though, that earned him his second yellow of the game.

What happened was an offside call was made and a clearly frustrated Defour kicks the ball out to touch, towards a set of Standard Liege fans. Either he was just being petulant or legitimately kicking it at the fans, a yellow card was warranted. It seems he took the Standard Liege banner a little too literally and chose Red.