This past Saturday, I was in Yankee Stadium for NYCFC’s game against Sporting Kansas City. This was their second home game and well, let’s just say it’s going to take some time for the newer fans to adapt to the game.

Anyway, back to the game. I must say that it was one of the strangest game experiences I have been a part of. The stadium itself wasn’t perfect for a soccer game but I’m pretty sure Yankee Stadium wasn’t designed for soccer so I wasn’t expecting perfection. Yankee Stadium was more than acceptable for a soccer game. It’s far and away better than watching a game at RFK Stadium. 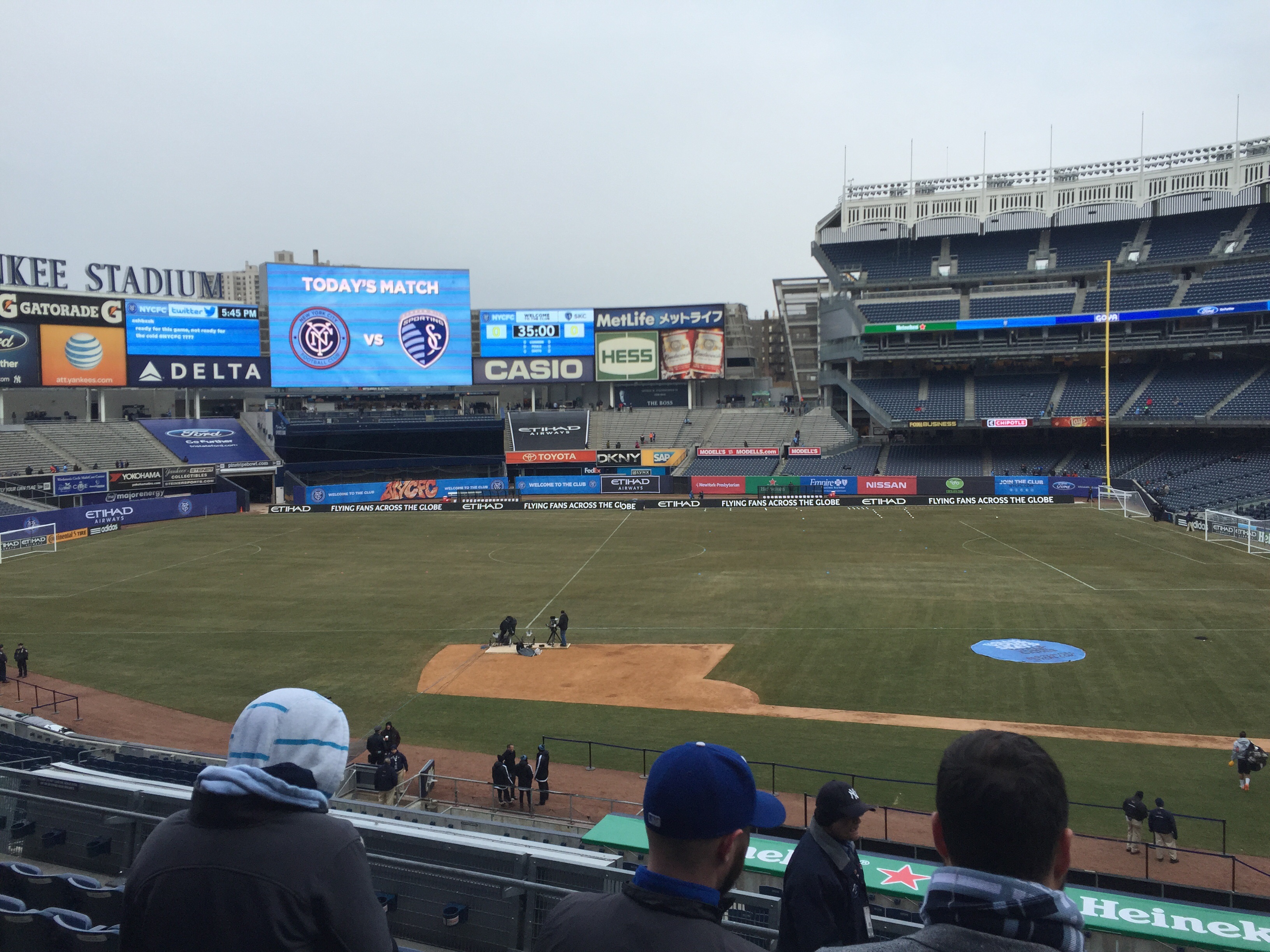 View from away section, right above midfield camera.

Full disclosure, I was sitting in the Sporting Kansas City away section, in the traveling Kansas City Cauldron supporters group. Sporting KC offers a limited number of free tickets to fans for away games.

The main reason this game was so strange was that many NYCFC fans seemed new to the game and didn’t really know the nuances of the game. To be fair, these will all be corrected over time but they’re things that need to be addressed. Some examples:

– A couple times, many NYCFC fans were confused and were sometimes cheering calls going against them or booing calls going for them. That confused some of the Sporting fans who might have missed the call and went off of what the home crowd was going for.

– For a 90 minute match, NYCFC fans need to create more than one chant. Yes, chanting “NYC” over and over is catchy and simple enough for everyone in the stadium to do but it gets to be repetitive like a children’s song very quickly.

– At one point, a Sporting player shot the ball into the stands in the second half. With NYCFC down 1-0, the fan who caught the ball must’ve been a new fan because he celebrated and tried to keep the ball when in actuality, it ate up a few precious seconds that NYCFC needed to score an equalizer. After the fan realized he needed to send the ball back to the field, he kicked the ball and almost hit GK Josh Saunders as he was about to take the goal kick, wasting more time as they got the other ball off the field.

– About five minutes left in the game, the jumbotron was telling NYCFC fans to get up and make noise because NYCFC was down 1-0 and hardly anyone did anything. I was actually pretty impressed about that because soccer fans don’t really take to the “forced cheering” thing that American sports have grown accustomed to.

The great thing about NYCFC in MLS is that the team has opened up the League to lots of new soccer and MLS fans. This is going to create some struggles at first with people learning to understand the game but that’s what “growing the game” is all about. Obviously the team needs their own stadium because Yankee Stadium isn’t ideal for anyone involved with NYCFC and the New York Yankees and they know that. Hopefully that gets worked out as soon as possible.

It doesn’t matter how you put it, Yankee Stadium was sold out (they normally won’t open the top) for this game and fans didn’t revolt when it was revealed that David Villa wasn’t playing. With David Villa not playing, the game being really cold and snowing and the team struggling to a 1-0 loss, the fact that the vast majority of NYCFC fans stayed until the final whistle is a good sign that they are going to have a strong fan base that is staying for the long haul.