The Desert Diamond Cup is underway and if you were able to catch the games online or our live coverage on Twitter, you caught some pretty good, high scoring games. We had 14 games scored in three games, including a big upset, a four goal half and one of the more crazier games that have been played in recent time.

We could only be on hand for the first 30 minutes but it appeared that the new USL team demolished Colorado. After a goal by Kris Tyrpack in the first 33 seconds, Colorado equalized. After that, the goal of the tournament was scored as Alberto Sanchez scored on a backheel to put Swope up 2-1. After a late stoppage time goal by Will Little, Swope Park Rangers took a big 3-1 victory over Colorado. Not bad for a team who just started training toghether a couple weeks ago.

For Colorado, they seemed to have their bright spots in the half hour we saw them play. I’m sure it won’t feel as good, losing that badly to a USL team but that’s now preseason works. Take the time to work out the issues before it counts in the regular season.

After both teams used the first half to get the rust off, Columbus and Sporting brought out the scoring boots almost instantly. Coming off his incredible MLS MVP nominated season, Kei Kamara scored twice. Once within seconds after the 2nd half began and the other after a penalty kick.

Sporting had to equalize twice in order to salvage the draw. First, after a scramble in the box, Soni Mustivar put the teams level at first. Then when Columbus scored again, Sporting draft pick Faik Hajdervoic put away the final equalizer to end the game 2-2.

In terms of individual players who I was impressed with, Chance Myers really stood out. Commanding the right side of Sporting’s defensive end, he won just about every challenge and really looked refreshed and in midseason form. 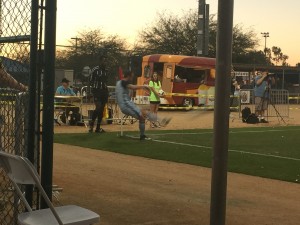 Obviously, as Kamara scored twice, he was impressive. But in all reality, Columbus is like night and day when Kamara plays or not. He’s very vocal, he seems to be able to connect the pass and effectively finished, which was a struggle in past years. He may not be able to replicate his previous season but he does seem on his way to having a pretty good season.

New England really looked like the class of the first half, as their passing was sublime. A flurry of one touch passes in the attacking third really set the team off. This passing worked when they took the lead early in the first half. Michael Gamble opened the scoring and even though Kyle Beckerman pleaded offside, the goal stood.

And in keeping up with tradition of the first two games having something happen within seconds of beginning, the start of the second half proved dramatic. RSL’s Aaron Maund got sent off and Charlie Davies scored the penalty to give New England a 2-0 league.

After that, Real Salt Lake actually got better. Javier Morales scored a penalty to put it within a goal. Then, a great header by Jamison Olave in the 68th minute put the game even, even though RSL was down to 10 for just about the entire half.

.@RealSaltLake's Olmes Garcia grabs the lead for 10 man RSL. Back from 2-0 since the red card. pic.twitter.com/Gcx6k2vVn7

Then to counter Real Salt Lake’s run, London Woodberry got sent off for New England to make it 10 v 10. Just seconds after the red, New England scored to make it 3-3 and end one of the more crazier games I have seen in person (preseason, regular season, postseason and Cup Final).