Let’s be fair to the kid, Jordan Morris is a talented soccer player. You don’t get to be called up to a senior national team while you are still going to college if you aren’t talented. The 21 year old Morris has a goal in seven appearances with the USMNT, a goal against Mexico in a friendly last April.

But again, let’s be fair. Let’s not just automatically assume he will be the answer to all of the USMNT’s problems. Let’s wait until Jordan Morris has played through the rigors of an entire Major League Soccer season as well as likely more appearances for the USMNT. For the Seattle Sounders, in 2016, their season can be anywhere from 37 games to 51 games if the Sounders max out all their tournaments entered. Jordan Morris’ final season with Stanford consisted of 25 games. He’s going to need to adjust to playing more games, located further apart and against tougher competition. Oh and not to mention, he’s going to have the eyes of the American soccer public all on him monitoring and critiquing his every move, unlike in college where not too many people watch, it may not be a shock to see Jordan Morris struggle next season.

Now don’t get me wrong, I like Jordan Morris, he seems like a nice, smart and well rounded person. And under the guidance of Clint Dempsey and Sigi Schmid at Seattle, he can be a superstar with the potential to head to Europe later in his career. I just think that so many people are expecting instantaneous success out of Morris that they may be left disappointed if he doesn’t immediately pick it up.

We all know about the tale of Freddy Adu and how he was anointed as”the next big thing” in American soccer. It is of everybody’s benefit to not go overboard and stay within reason of hyping Jordan Morris. It doesn’t help matters when MLS emails fans with the subject line “The next great American star arrives” and the Sounders tweeting this:

Thankfully Landon Donovan responded and became the voice of reason when he responded to Seattle’s tweet.

He may have a better chance at a successful career if you don't compare him to Messi the day he signs #JustSaying 😉 https://t.co/50VtPpqddK

Hopefully the excitement of Morris’ signing can wear off a bit before the start of the MLS season and Jordan Morris can get into his own groove on his own terms without having to feel like he needs to be the savior of U.S. Soccer. Because we made this mistake with Freddy Adu and can say the same about so many others before and after him. Remember when Bobby Convey was on the cover of Sports Illustrated for the 2006 World Cup and was supposed to be one of those “next big things for U.S. Soccer?” 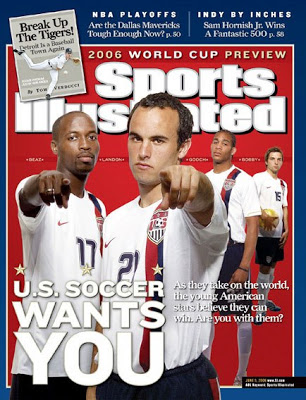 Yeah, that really turned out well.

It very much looks like Jordan Morris is going to be a great player. It’ll be tough to say if he’ll be a superstar or not but given enough time, he can at least be a great player who can be a playmaker for whatever team he plays on. Let’s not make him the next Messi or act like the USMNT is going to win the World Cup before he has even played in his first pro game. Because the last thing any of us wants to see is Jordan Morris doing this on Twitter when he’s supposed to be in the prime of his soccer career.

Freddy Adu – from Pele's heir apparent to promoting vacuum cleaners on Twitter. Can't help but feel sorry for him. pic.twitter.com/WPLUW9WJ99