On April 6, 1996, the San Jose Clash (now Earthquakes) and D.C. United started a new era for soccer in the United States. It was the actual on-field start of Major League Soccer and began something we would be benefitting from to this day.

Before MLS, league soccer in the United States was kind of non existent. Except for the brief 70’s explosion of the New York Cosmos and NASL when Pele, Franz Beckenbauer, Giorgio Chinaglia, Carlos Alberto, George Best, Johan Cruyff, Rodney Marsh and the like made soccer a mainstream sport in the 70’s. After getting “too big, too fast” and most of the teams going bankrupt and/or losing lots of money, NASL folded and club soccer in the United States went back into wilderness for another decade until MLS came aboard after a promise to create a club league in exchange for hosting the 1994 FIFA World Cup.

Thankfully, Kick (formerly KickTV) has a slightly condensed version of the game on YouTube if you want to watch and follow along. The play-by-play commentator is a familiar name to anyone who watches La Liga as Phil Schoen had the call on ESPN.

To start, introducing actor Andrew Shue to do the coin toss was one of the more “90’s” things to happen in this game. In fairness to Shue, he was on Melrose Place at the time so he was a semi-recognizable celebrity at that time and he was actually signed with the LA Galaxy in 1996, notching an assist in five appearances. One of those awkward early days things you have to love about MLS back then.

Another thing you had to love about MLS looking back now was the insane kit combinations. Granted, there were some bizarre looking kits in other, more established leagues in the 90’s but MLS and Nike took things to another level back then. Except for a traditional black with white stripe look for D.C. United, the other nine MLS teams went out there with some wild designs that everyone apparently wore two sizes too big. 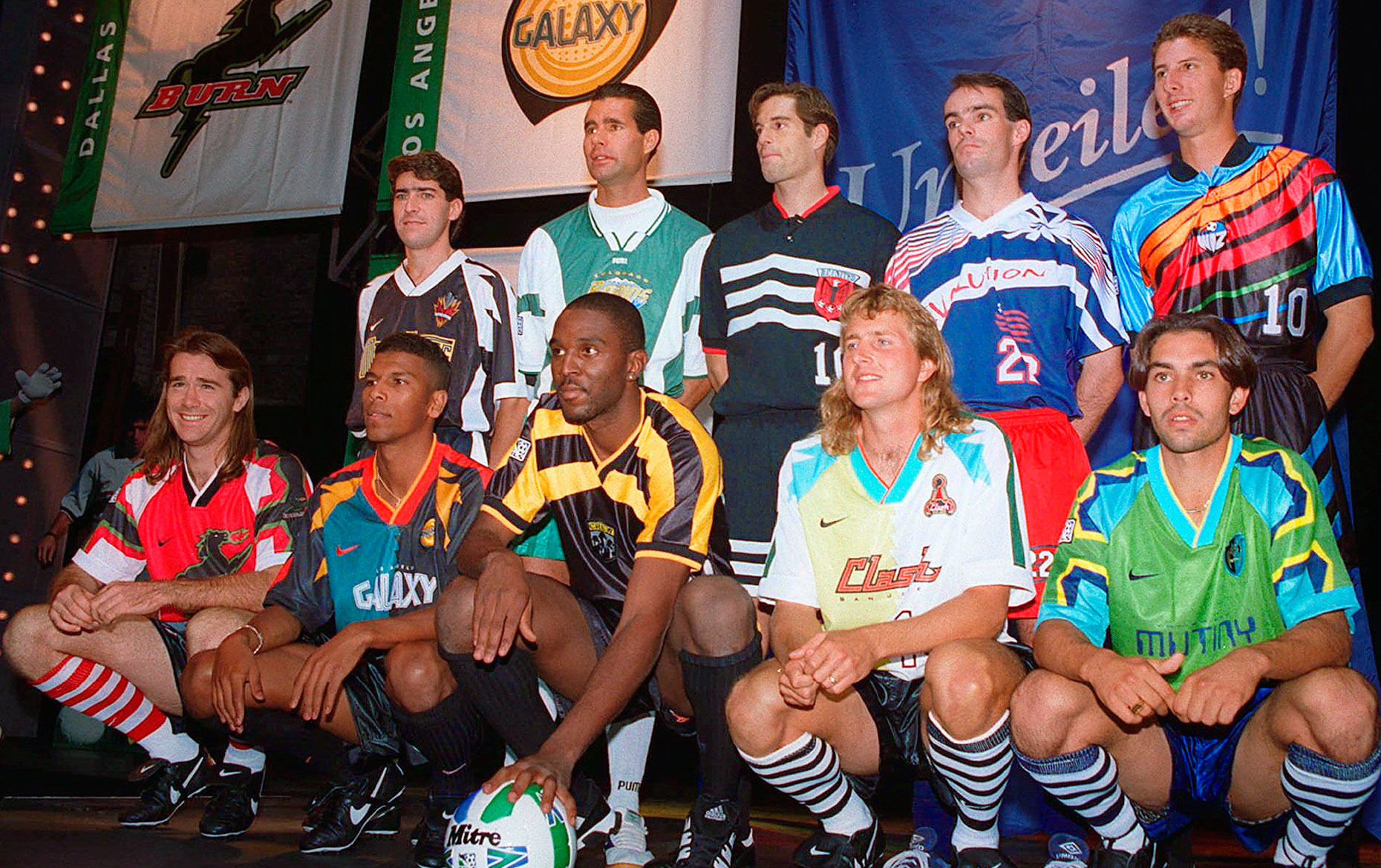 You will also notice very early on that the game clock counted down instead of up. It was one of those things done in the early days to “Americanize” soccer for the fans. You won’t see it here but MLS also did shootouts at the end of tie games because there would be no draws. And that shootout wasn’t just any penalty shootout but a running 1v1 with the goalkeeper from 35 yards out that was developed in the 1970’s NASL. You know how you look back at your younger years and wonder what were you thinking at some of the things you did, that’s MLS in the first five years with some of the things they did. Now, you can do nothing but laugh and look fondly on that. Though, I maintain that the NASL 1v1 shootout is way more exciting than a penalty shootout.

Maybe it was out of curiosity or because it was new, but there were a lot of people at this inaugural game and these fans were loud throughout the game. Over 30,000 were in Spartan Stadium. Some may have been fans of the Earthquakes in the 70’s and some were new but they all seemed like they had a good time.

I’m not going to lie, this wasn’t one of the best games ever played. In fact, the first game almost ended 0-0 and considering this was many people’s first foray into soccer, a 0-0 game going into a shootout would probably have been a disaster in the future of the league. With less than three minutes to go, San Jose’s Eric Wynalda weaved through the D.C. defenders and put out a far post shot to cause the stadium to erupt, blast another “jock jam” over the PA system and MLS officials breathe a sigh of relief that they didn’t get a 0-0 ending. By the end of the season, D.C. United would win the first of three MLS Cups in the first four years of the league and become MLS’ first dynasty.

While MLS had some rough years in the beginning, and the possibility of folding in the first decade, MLS is stronger than ever and now seems to be financially stable to be here for the long haul. The impact MLS has had in American soccer and thus the national team is debatable but there has been an impact. However big or small, the soccer landscape in the United States both for fans and players, would look very different if people like Phil Anschultz, Lamar Hunt, Robert Kraft, Alan Rothenberg and others didn’t form the league as a prerequisite for hosting the 1994 FIFA World Cup. Is MLS perfect, no I don’t think anyone is saying that. Considering how MLS started, they have gone through some much needed changes and improvements over 20 years that we should expect similar change 20 years from now. Maybe in 2036, we will be looking back at 2016 and get a laugh at some of the things MLS did just like we are able to do looking back on 1996.